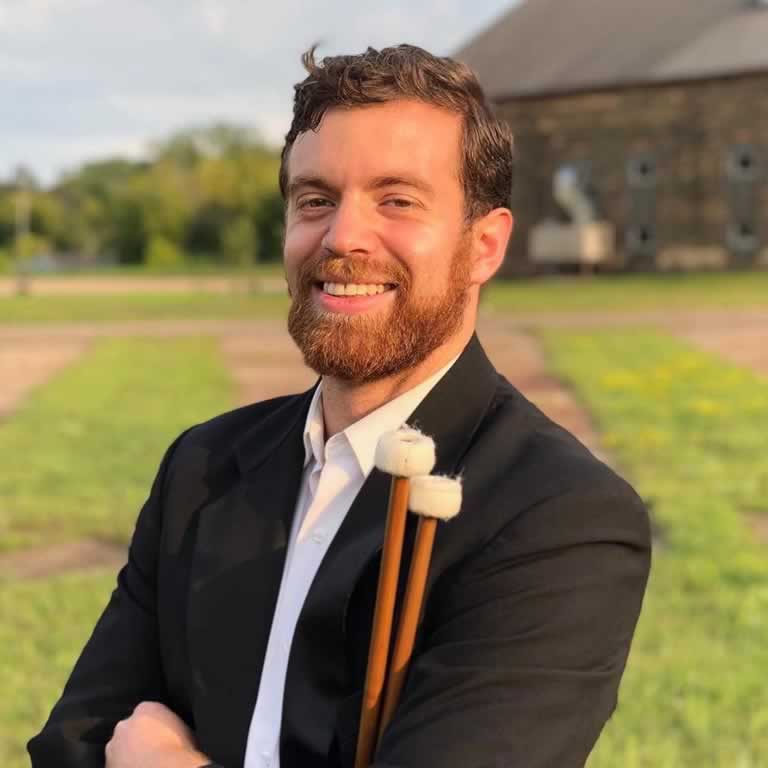 Erich Rieppel was appointed Principal Timpanist of the Minnesota Orchestra in the Fall of 2018. Prior to that, he held the same title at New World Symphony under Michael Tilson Thomas in Miami Beach, Florida. Rieppel has performed as Principal Timpanist with the Seattle Symphony, Detroit Symphony, and New Jersey Symphony. He has held the posts of Associate Timpanist of the Chicago Civic Orchestra, Substitute Timpanist with the Louisville Orchestra and Charleston Symphony, and Principal Timpanist of the Terre Haute Symphony and the Columbus Indiana Philharmonic. Since 2014, he has played timpani and percussion with the Lakes Area Music Festival in northern Minnesota. At age 19, during a performance with the New York String Orchestra at Carnegie Hall, his playing caught the ears of a critic from the New York Times. “… and the timpanist, Erich Rieppel, jousted mightily with Mr. Watts in the boisterous finale.” In a performance of Dvorak’s Eighth Symphony with the Minnesota Orchestra, the Pioneer Press noted “And timpanist Erich Rieppel seized the many opportunities to send hearts racing that Dvorak afforded him.”

Rieppel has given masterclasses at the University of Minnesota, National Youth Orchestra of the USA, and the Ibera Academy in Medellin, Colombia. He will soon give masterclasses at the Northland Timpani Summit based in Minneapolis, The Final Round seminar in Chicago, and the University of Panama. In February of 2019 at the New World Center, he performed with the 507 Collective, a piano/percussion quartet that includes his father, Dr. Daniel Rieppel.

Believing in being a multi-faceted musician, Rieppel has experience in arts administration, college teaching, music librarianship, composition and conducting. He made his professional conducting debut with the Southwest Minnesota Orchestra in 2013. In the 2014-15 season, he was principal conductor of the Indiana Youth Musicians and made his debut with the Columbus Symphony Orchestra (IN) the same year. He also led performances with the self-founded Bloomington Sinfonietta in Bloomington, Indiana.

A native of Minneapolis, Erich grew up near Marshall, MN. He attended Indiana University for his bachelor’s with a minor in conducting and master’s degrees where he studied a variety of percussion with John Tafoya, Kevin Bobo, Steve Houghton, and Michael Spiro. He has also studied with Josef Gumpinger, David Herbert, Shannon Wood, Ed Stephan, Tom Freer and other artists of great influence. He spent one summer at the Aspen Music Festival and three winters at the New York String Orchestra Seminar. Rieppel proudly endorses Freer Percussion Products and Pearl/Adams percussion. In his free time, Erich plays hockey.