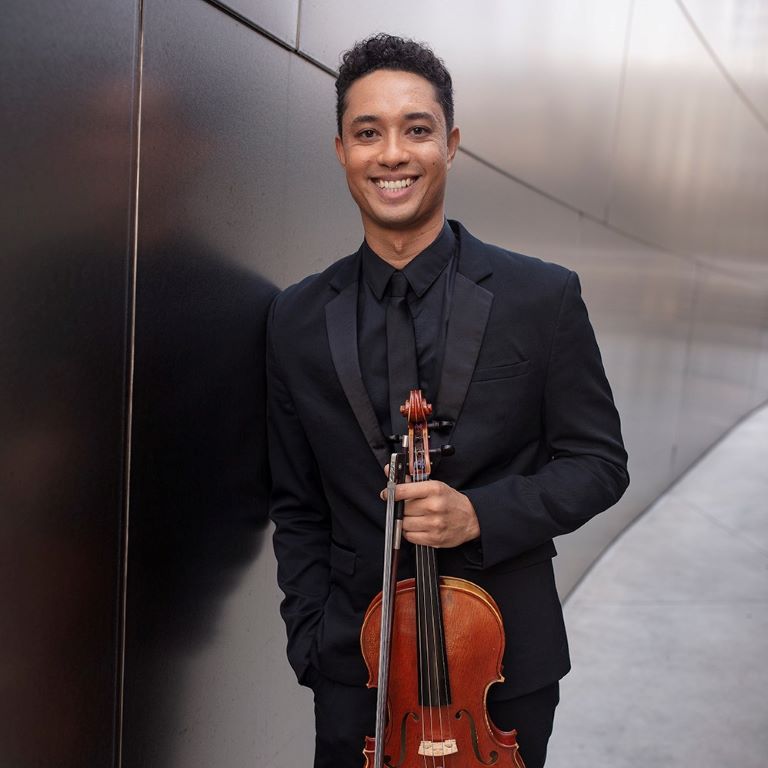 Jarrett Threadgill, a Southern California native, began studying music in public school at the age of eight years old. Setting his sights on becoming a professional musician, he graduated from the Orange County High School of the Arts where he enhanced his music abilities. After receiving a Bachelor of Music degree from Chapman University’s Conservatory of Music, Jarrett spent a year teaching music at Renaissance Arts Academy, a public charter school in Los Angeles. His engagement with these students guided his career development in recognizing the significant impact that equity through music and arts education can have on young children.

Threadgill went on to receive his Master’s from The Cleveland Institute of Music, which was the impetus to becoming an orchestral musician. He was awarded a teaching assistantship and full-tuition scholarship at the University of Miami to pursue his Artist Diploma and upon completion, became a Viola Fellow with the New World Symphony from 2015-2018. Additionally, Jarrett was able to participate in an exchange program with the Iberacademy in Medellín, Colombia renewing his commitment to coaching and mentoring young musicians.

Jarrett has performed with many ensemble groups in the United States, as well as around the world. He had the privilege of working under notable conductors, such as Michael Tilson Thomas, Charles Dutoit, Paavo Järvi, Fabio Luisi, and Esa-Pekka Salonen. Some past music festivals include the National Repertory Orchestra, Aspen Music Festival and School, Castleton Festival, Le Domaine Forget in Quebec, and the Verbier Festival in Switzerland.

Mr. Threadgill is an avid chamber musician and recently toured in a piano quintet with Lincoln Center Stage aboard a Holland-America cruise line. During the 2018-2020 seasons, he served as Principal Viola of the Canton Symphony Orchestra. In this time he was also afforded opportunities to perform with the Buffalo Philharmonic, North Carolina Symphony, The Cleveland Orchestra, and the Toledo Symphony.

Jarrett is thrilled to return to Southern California and honored to be joining the Los Angeles Philharmonic as a first-year Resident Fellow.

In 2006, he was awarded the Marilyn L. Crandon Music Award for Outstanding Achievement in the Orange County Youth Symphony Orchestra from the Orange County Philharmonic Society. In 2008, he was the recipient of a two-year scholarship from the Warne Charitable Foundation, and in 2010, the Chapman University Conservatory of Music awarded Mr. Threadgill the Kirkpatrick Scholarship in recognition of academic excellence and exceptional performance.

He has also performed in chamber music masterclasses with Peter Winograd and Wolfram Koessel of the American String Quartet and Eugene Drucker of the Emerson String Quartet.

Jarrett Threadgill joined the Canton Symphony as Principal viola in 2018 after finishing a three-year fellowship with the New World Symphony. As a young musician, he has had the opportunity to travel with several different ensembles and performing groups in Italy, Austria, France, Korea, and Switzerland. Past festivals include Chamber Arts Fest, the National Repertory Orchestra, Aspen Music Festival, and School, Le Domaine Forget, Castleton Festival, and most recently the Verbier Festival. Mr. Threadgill received a bachelor of music degree from the Chapman University Conservatory of Music and a master of music degree from The Cleveland Institute of Music. He then went on to complete an artist diploma from the University of Miami during which he was awarded a teaching assistantship and full-tuition scholarship.