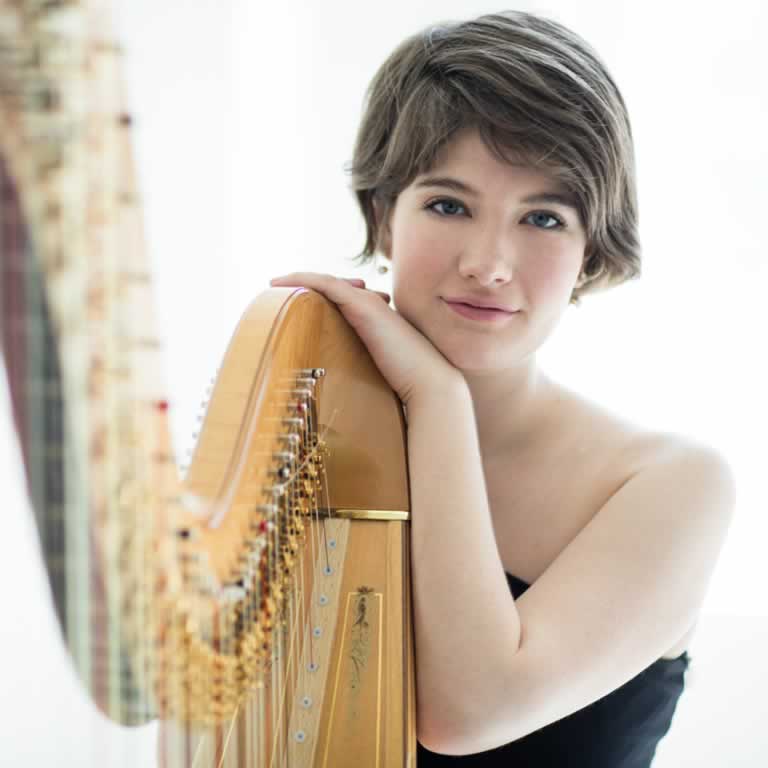 Emily Levin is the Principal Harpist with the Dallas Symphony Orchestra. Her playing has been praised for its “communicative, emotionally intense expression” (Jerusalem Post), Emily brings the harp to the forefront of a diverse musical spectrum, using her instrument to connect with all audiences.

Now in her third season with the Dallas Symphony Orchestra, Emily has also performed as Guest Principal Harp with the Los Angeles Philharmonic and the Houston Symphony, and regularly appears with the New York Philharmonic. As a soloist, she has performed throughout North America and Europe, in venues including Carnegie Hall (New York), the Kimmel Center (Philadelphia) and Festspiele Mecklenburg-Vorpommern (Rugen, Germany). At the request of conductors Jaap van Zweden and John Adams, she appeared as soloist with the DSO in 2018 and 2019; other concerto performances include the Jerusalem, Colorado and West Virginia Symphony Orchestras, the Louisiana Philharmonic, the Lakes Area Music Festival, and the Indiana University Festival Orchestra, among others. For her debut album, Something Borrowed, the Classical Recording Foundation named her their 2017 Young Artist of the Year.

Emily is a top prize winner at the two most prestigious harp competitions—the 2013 USA International Harp Competition, where she won the Bronze Medal, and the 2009 International Harp Contest in Israel, where at age 18 she was a Finalist and recipient of the Renie Prize. She is a 2016 Winner of the Astral Artists national auditions.

In 2019, Emily was appointed Artistic Director of the Fine Arts Chamber Players, a concert chamber music series presented at the Dallas Museum of Art. Other notable chamber music performances include the BRAVO! Vail Music Festival, the Lyric Chamber Music Society, the Colorado Chamber Players. Most recently, she recorded a live concert in New York City with her duo partner, guitarist Colin Davin, for video release in spring 2020.

A strong believer in music’s powerful impact, Levin organized a concert series in early 2017 with her fellow Dallas musicians, with all profits benefiting the International Rescue Committee and the Refugee Services of Texas. As Artistic Director of FACP, she presents chamber music concerts to the community that are free of charge and open to all. She is passionate about sharing music in schools, and is currently working with the Dallas Symphony to offer free harp lessons as part of their South Dallas Education Initiative.

Emily was named Adjunct Associate Professor of Harp at Southern Methodist University in 2019, and is also on Faculty at the Young Artist’s Harp Seminar. She received her Master of Music degree in 2015 at the Juilliard School under the tutelage of Nancy Allen, where she was a teaching fellow for both the Ear Training and Educational Outreach departments. A self-described bookworm, she completed undergraduate degrees in Music and History at Indiana University with Susann McDonald. Her honors history thesis discussed the impact of war songs on the French Revolution.