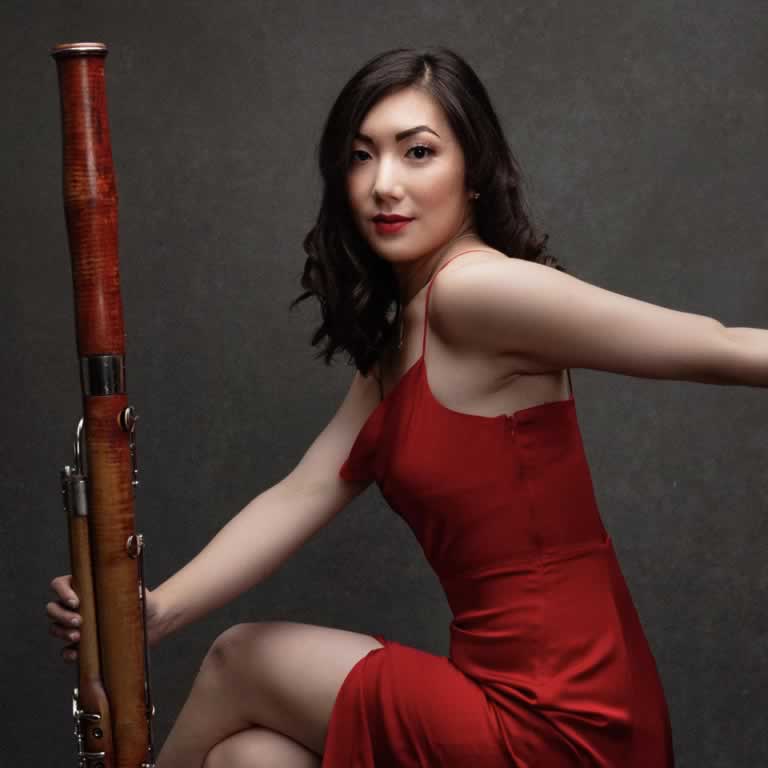 As a soloist, Chen appears regularly with the Milwaukee Symphony and is recognized for her “elegant, buttery tone“ (The Shepherd Express).  Chen’s Mozart concerto performances with the Milwaukee Symphony Orchestra was described as, “One rarely hears the Mozart bassoon concerto and, for that matter, rarely hears bassoonists performing concertos. Chen’s performance was a lovely reminder of the lyrical and technical possibilities of the instrument. She played with a polished, warm sound, full of color and nuance…the cadenzas, which she had written, revealed some technically pristine, wonderfully musical playing” (Milwaukee Journal Sentinel). Chen has also had solo engagements with The Philadelphia Orchestra, “The President’s Own” United States Marine Band, and The Juilliard School’s Pre-College Orchestra, and has been hailed by the Philadelphia Inquirer as, “assured and startlingly lyrical, [her solo] signaled an orchestra-wide philosophy”. Chen is also involved in performing new works. In 2015, she gave a world-premiere of the Tanganera, a tango written by Rui dos Reis for bassoon and piano at Curtis Field Concert Hall.

During her summers, Chen has participated at prestigious music festivals such as Marlboro Music School and Festival, Tanglewood Music Center, Music from Angel Fire Festival by invitation of violinist Ida Kavafian, North Shore Chamber Music Festival by invitation of violinist Vadim Gluzman, Music Academy of the West, Castleton Music Festival, Pacific Music Festival, National Orchestral Institute + Festival, Britt Music & Arts Festival Orchestra and Lakes Area Music Festival. Chen has also performed at Carnegie Hall through the New York String Orchestra Seminar during Christmastime of 2010. In 2012, Chen was selected as one of three bassoonists to participate in an orchestral masterclass given by Stefan Schweigert, Principal Bassoon of the Berlin Philharmonic, in New York City at the Berlin Philharmonic at Carnegie Hall Workshop.

Originally born in Taipei, Taiwan, Catherine Chen began her musical studies playing the piano at the age of four and the cello at the age of five.  Chen moved with her mother and siblings to the United States when she was six years old. She continued playing both piano and cello until beginning to play the bassoon at age fourteen. She started her bassoon education under the tutelage of Joyce Kelley, former Principal Bassoon of the New York City Opera, and went on to study with Marc Goldberg, former Associate Principal Bassoon of the New York Philharmonic, at the Pre-College Division of The Juilliard School. Catherine later received her Bachelor of Music from the Curtis Institute of Music, where she studied with Daniel Matsukawa, Principal Bassoon of the Philadelphia Orchestra.