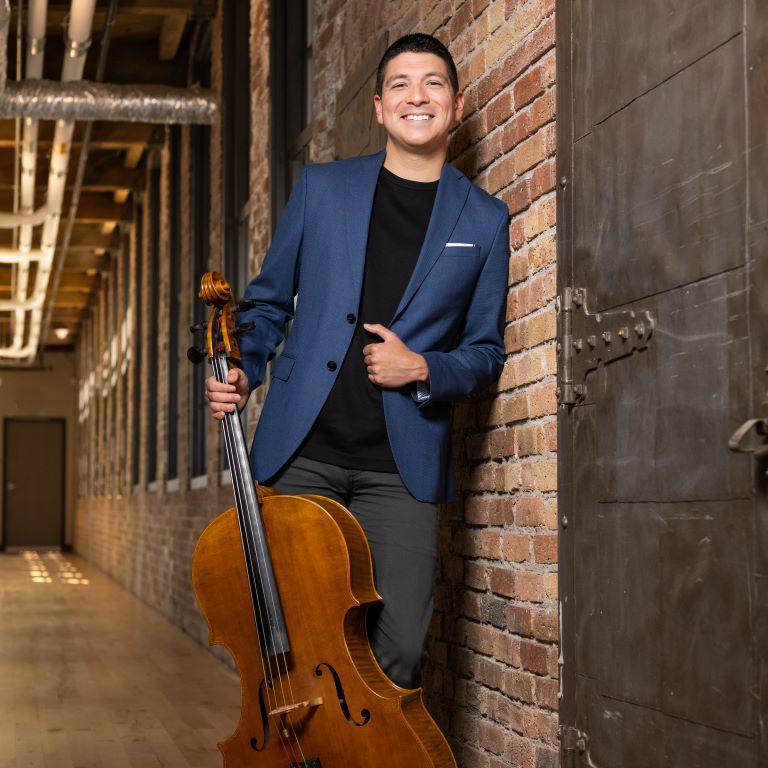 A native of Tucson, Arizona, cellist Nicholas Mariscal is the newly-appointed Assistant Principal Cellist of the Milwaukee Symphony Orchestra. A recent alumnus of the New World Symphony in Miami, Mr. Mariscal is a winner of the orchestra’s concerto competition, performing the rarely-
heard Khachaturian Concerto-Rhapsody for cello. In 2018, he made his professional concerto debut performing the same work with the Tucson Symphony Orchestra. Additionally, he is a top prize winner in the Sphinx, Edith Knox, and Indiana University Latin American Music Center
competitions.

Recently, Mr. Mariscal was invited to perform as Guest Principal Cello with the Trondheim Symphony Orchestra in Norway, on its tour of South Korea with conductor Han-Na Chang. He has also performed as Principal Cello of the Fjord Cadenza Festival in Ålesund, Norway, in addition to participating in the Tanglewood, Heifetz, and Aspen music festivals. An avid chamber musician, he has performed with esteemed artists such as Midori Goto, Jorja Fleezanis, Tamás Varga, Atar Arad, Frank Almond, and Paul Kantor.

A passionate proponent of lesser-known and new music, Mr. Mariscal is an especially ardent performer of Latin American music. While still an undergraduate at Indiana University, he won the Latin American Music Center’s Recording Competition, giving him the opportunity to record and share rarely-heard music for unaccompanied cello by 20th and 21st century composers including Osvaldo Golijov, Alberto Ginastera, Paul Desenne, and Leo Brouwer. As a fellow at the New World Symphony, he took the same inspiration and curated a full orchestra and multimedia program titled Alma Latina, with the goal of sharing just a small sample of the trove of undeservedly neglected works from Latin America. As a performer of new music, he has been involved in dozens of premieres of new works, and has performed extensively as a member of the Aspen Contemporary Ensemble, the Indiana University New Music Ensemble, and USC’s Thornton EDGE ensemble. Following his Aspen performance of Tan Dun’s Elegy: Snow in June for cello and percussion ensemble, The Aspen Times wrote, “Mariscal seemed born to play Dun’s soulful, endlessly inventive and expressive music. With rock-solid technique and undeniable star quality, Mariscal seemed less a student getting a break than a bona fide artist.” As a performer, Mr. Mariscal believes strongly in working to make classical music approachable and accessible to everyone, and strives to do so by speaking to audiences frequently, and attempting to break down traditional barriers in performances. Mariscal received his Bachelor of Music degree from Indiana University under the tutelage of Eric Kim, and received a Master of Music degree and Graduate Certificate from the University of Southern California, where he studied with David Geringas and Ralph Kirshbaum.