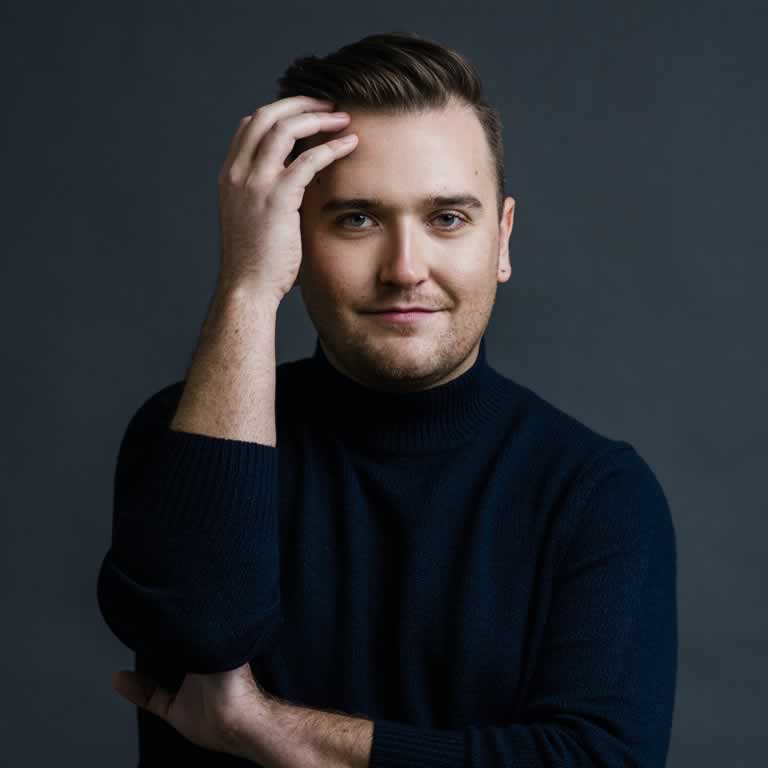 Miles Mykkanen has garnered recognition on the world’s concert and operatic stages for his “focused, full-voiced tenor” (The New York Times). Of his performance in the title role of Candide at Tanglewood, it was reported in Opera, “Mykkanen sang and spoke feelingly and superbly, with crystalline diction, a powerful lyric sound seemingly capable of infinite dynamic gradations.”

In the 2020-21 season, Miles Mykkanen was engaged for performances at the Festival d’Aix en Provence and with Chamber Music Society of Lincoln Center and Mostly Mozart Festival Orchestra. His calendar anticipates his debut at the Bayerische Staatsoper as Chevalier de la Fore in a production by Dmitri Tcherniakov of Dialogues des Carmélites under the baton of Bertrand de Billy, the title role of Candide with the Lithuanian National Opera, a Seattle Opera debut as Don Ottavio in Don Giovanni directed by Brenna Corner with conductor Lidiya Yankovskaya, and a return to the Metropolitan Opera to sing Novice in Billy Budd under the baton of Simone Young. The tenor also joins Musicians from Marlboro on a domestic tour performing Schubert’s Auf dem Strom and Britten’s Canticle III with Radovan Vlatkovic (horn) and Lydia Brown (piano).

Miles Mykkanen made his Metropolitan Opera debut last season in the company’s new William Kentridge production of Wozzeck led by Yannick Nézet-Séguin and other highlights included the title role of Candide at the Opéra de Lausanne, Der Fliegende Holländer at the Canadian Opera Company, and Il barbiere di Siviglia with Opera Columbus. The tenor’s vibrant concert schedule included performances of Bruckner’s Te Deum with Manfred Honeck and the Pittsburgh Symphony, a world premiere of Mohammed Fairouz’ Another Time with Leonard Slatkin and the Detroit Symphony Orchestra, and the Mozart Requiem with David Danzmayr and the San Antonio Symphony.

Highlights of the recent past include a Minnesota Opera debut in the Pulitzer Prize-winning opera Silent Night by Kevin Puts and Mark Campbell, a debut at the Canadian Opera Company in Robert Lepage’s The Nightingale and Other Short Fables, A Midsummer Night’s Dream at Opera Philadelphia in Robert Carsen’s production conducted by Corrado Rovaris, and Ariadne auf Naxos with Franz Welser-Möst and The Cleveland Orchestra. One of his signature roles, Candide has been given at Arizona Opera, Palm Beach Opera, and at the Ravinia and Tanglewood festivals in performances with The Knights.

Miles Mykkanen made his New York Philharmonic debut in a program of excerpts from West Side Story conducted by Leonard Slatkin and joined the Bard Music Festival for Moniuszko’s Halka and Berlioz’s Roméo et Juliette with Leon Botstein conducting the American Symphony Orchestra. He has sung Handel’s Messiah with the symphonies of Atlanta, Indianapolis, and New Jersey, with the National Symphony Orchestra at The Kennedy Center, and at the University of Michigan’s Hill Auditorium under the auspices of the University Musical Society.

He spent the past three summers at the Marlboro Music Festival where his performances have spanned from art songs of Brahms and Britten to chamber music of Brett Dean with distinguished guest artists Mitsuko Uchida, Malcolm Martineau, Roger Vignoles, and many others. He frequently appears with Steven Blier, Michael Barrett, and the New York Festival of Song and has also collaborated with Juilliard415, the Mostly Mozart Festival Orchestra, New World Symphony, Philadelphia Chamber Music Society, and Chamber Music Society of Lincoln Center.

Miles Mykkanen is a champion of new music and has given the world premieres of Ricky Ian Gordon’s Twenty-Seven, Jack Perla’s Shalimar the Clown, and of Matthew Aucoin’s Crossing at the American Repertory Theatre directed by Diane Paulus. Opera News wrote, “Miles Mykkanen’s work was especially distinctive: his burnished high tenor seemed like the organizing principle around which the other voices cohered.”

The tenor is a 2019 Sara Tucker Study Grant winner, youngARTS Gold winner and the recipient of prizes from the Sullivan Foundation, Toulmin Foundation, Novick Career Advancement Grant, and Juilliard’s Joseph W. Polisi Award. Miles Mykkanen is a graduate of the Interlochen Arts Academy and earned his Artist Diploma in Opera Studies, along with his Bachelor’s and Master’s degrees, from The Juilliard School under the tutelage of Cynthia Hoffmann.