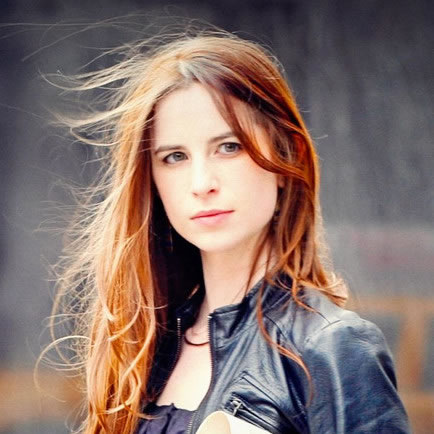 Hailed by critics for her “tonal bloom” and “hauntingly beautiful performances,” English-American performer and composer Emi Ferguson stretches the boundaries of what is expected of modern-day musicians. Emi’s unique approach to the flute can be heard in performances that alternate between the Silver Flute, Historical Flutes, and Auxilary Flutes, playing repertoire that stretches from the Renaissance to today.

Emi can be heard live in concerts and festivals around the world as a soloist and with groups including AMOC*, the New York New Music Ensemble, the Handel and Haydn Society, the Manhattan Chamber Players. She has spoken and performed at several TEDX events and has been featured on media outlets including The Discovery Channel, Vox’s “Explained” series on Netflix, Amazon’s The Marvelous Mrs. Maisel, and Juilliard Digital’s TouchPress apps talking about how music relates to our world today. Her debut album, Amour Cruel, an indie-pop song cycle inspired by the music of the 17th century French court was released by Arezzo Music in September 2017, spending 4 weeks on the Classical, Classical Crossover, and World Music Billboard Charts. Her 2019 album Fly the Coop: Bach Sonatas and Preludes, a collaboration with continuo band Ruckus debuted at #1 on the iTunes classical charts and #2 on the Billboard classical charts, mining the depths of possibility in continuo and flute performance.

Emi was a featured performer alongside Yo-Yo Ma, Paul Simon, and James Taylor at the 10th Anniversary Memorial Ceremony of 9/11 at Ground Zero, where her performance of Amazing Grace was televised worldwide. Her performance that day is now part of the permanent collection at the 911 Museum.

Emi is passionate about developing new music and has premiered works by many of today’s leading composers. Emi has been a featured performer at the Marlboro Music, Lake Champlain, and Lucerne Festivals, Portland Bach Festival, Bach Virtuosi Festival, June in Buffalo, Twickenham Fest, and Chamberfest Dubuque, and has performed and taught with Juilliard Global in Brazil, pianoSonoma in California, Juilliard Baroque in Germany, and Les Arts Florissants in France and has been featured as a soloist and ambassador for Elliott Carter’s music in China and Japan.

As a Baroque Flutist, in addition to her new appointment as Principal Flute of the Handel and Haydn Society, Emi is a frequent guest artist with period ensembles including Tafelmusik, Voices of Music, the American Classical Orchestra, Trinity Baroque Orchestra, and Juilliard 415. She was the only flutist accepted to Juilliard’s inaugural Historical Performance class, and has performed alongside William Christie and Les Arts Florrisants, and with Christophe Hammer, Massaki Suzuki, Christopher Hogwood, and Nicholas McGegan with whom she was a concerto soloist in Alice Tully Hall and on WQXR, New York City’s classical music station.

Emi is currently on the faculty of the Juilliard School teaching Ear Training, the Bach Virtuosi Festival, and has taught on the faculty of the University of Buffalo. Emi was the first person to have graduated from Juilliard with Undergraduate and Graduate degrees with Scholastic Distinction in flute performance, as well as a second Graduate degree in Historical Performance as a Paul and Daisy Soros Fellow

Her principal teachers have been Carol Wincenc, Sandra Miller, Robert Langevin, and Judy Grant. Born in Japan and raised in London and Boston, she now resides in New York City.