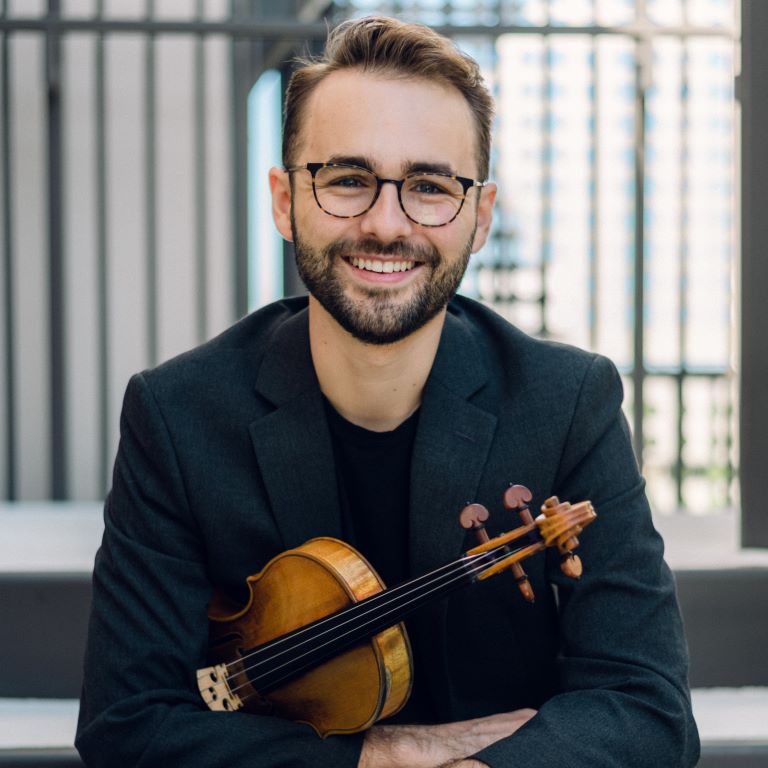 A passionate chamber musician with a varied background, Cameron Daly (b. 1996) joins the Callisto Quartet after having won a position in the Naples Philharmonic at age 22. Cameron has performed chamber music alongside notable artists including Andres Diaz, Stephen Drury, James Ehnes, Milena Pajaro-van de Stadt, and Peter Winograd, and has been invited to perform at the Taos Chamber Music Festival, the Chamber Music Society of Lincoln Center, and the Tanglewood and Aspen music festivals. As a concertmaster, Cameron has appeared with the Tanglewood Music Center Orchestra, the Yale Philharmonia, and the Yale Symphony Orchestra, including performances of Mahler’s Symphony No. 4, Strauss’s Four Last Songs and Also Sprach Zarathustra, a solo performance of Glazunov’s Violin Concerto, as well as Tchaikovsky’s Serenade for Strings at Tanglewood led without conductor.

At Yale, Cameron primarily studied U.S.-Russian relations, graduating cum laude (B.A. Global Affairs ‘18) prior to earning his Master’s degree in Violin Performance (M.M ‘20) under the tutelage of Ani Kavafian. He received the Yale School of Music’s Alumni Association prize, Yale’s Wrexham and Sharp prizes for musical performance, and distinction in the Global Affairs major for his work on a quantitative framework for the World Bank’s International Finance Corporation’s use in analyzing and anticipating the development impact of private equity fund managers in Sub-Saharan Africa. Chamber music being his greatest artistic joy, Cameron is honored to be continuing the Callisto Quartet’s tradition of musical excellence. In his spare time, Cameron enjoys programming computer software, surfing (although this hobby is largely a relic of his time growing up in California), and spending time with his loved ones. Cameron lives with his girlfriend, Emerson, and their (adorable) dog, Piper.