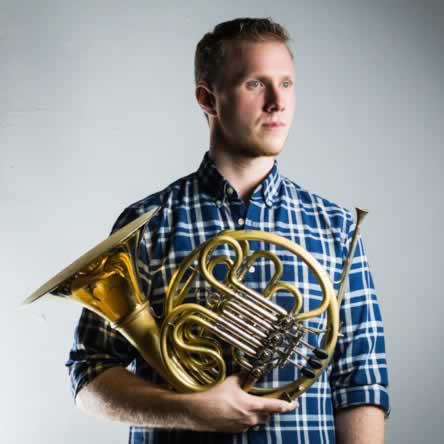 Brett Hodge, a native of St. Louis, Missouri, is currently the Principal Horn of the Omaha Symphony, a position he has held since 2016. In addition to this position, he also serves as the Third Horn of the Grant Park Music Festival held in Chicago, Illinois, where he spends the majority of his summers.

​Hodge earned his Bachelors of Music in Horn Performance, under the tutelage of Martin Hackleman, from the University of Missouri-Kansas City Conservatory of Music and Dance in 2014. Other notable teachers include, Ellen and Doug Campbell, Thomas Bacon, Tod Bowermaster, Thomas Jöstlein, Roger Kaza, Julie Landsman and John Thomas.

Prior to his appointments in Omaha and Chicago, he served as the Principal Horn of the South Dakota Symphony and Third Horn of Orchestra Iowa in Cedar Rapids.

In his free time, he enjoys spending time with his daughter, Paisley and dog, Sadie.