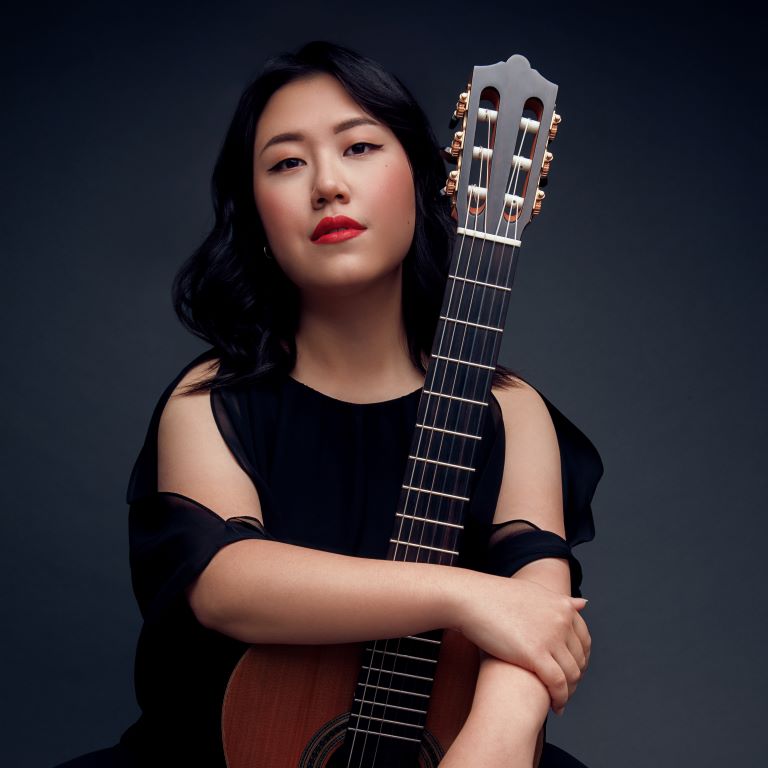 Praised by Classical Guitar Magazine as “confident and quite extraordinary,” Korean guitarist, Bokyung Byun​ enjoys a reputation as one of the most sought-after guitarists of her generation. Byun holds the distinction of being the first female winner of the prestigious JoAnn Falletta International Guitar Concerto Competition, where Falletta herself described  Byun’s performance as “stunning, showcasing her gorgeous tone, immaculate technique, and sophisticated musicianship.” This win is among many wherein Byun excelled in the competitive circuit, including winning the grand prize at the Guitar Foundation of America International Concert Artist Competition, known as the most prestigious guitar competition in the world.

A bevy of orchestras, festivals, workshops, and guitar societies look to Byun for solo performances and masterclasses. In recent seasons, Byun has performed as a soloist with orchestras, including the Buffalo Philharmonic, the Utah Symphony, West Los Angeles Symphony, New Juilliard Ensemble, the Aspen Music Festival Orchestra, among others. Her solo recital highlights include performances at the Kumho Young Artist Series, Philadelphia Guitar Festival, Aspen-Salida Concert Series, Toronto Guitar Weekend, Guitar Montréal, Ellnora | The Guitar Festival, and San Diego Guitar Festival. She was acclaimed for performing “eloquently through a diverse and challenging program,” by Michelle Fratus, president of the board of the Knoxville Guitar Society, and having “confidence, passion, excellent projection and great dynamic contrast” by Heather Morand Clark, president of the Guitar Society of Toronto.

Committed to expanding the role of a 21st-century musician, Byun’s concert program often features contemporary music alongside traditional repertoire. As Byun herself says, “it’s vital and exciting to audiences for concerts to join the new with the old. For guitar music to continue to grow, I believe that new works must actively be cultivated in programming, and it is my hope that audiences leave my performances with new experiences.” This skill at navigating both classic repertoire and fresh work has led her to co-found Sounding Board: The New Music Initiative for Guitarists and Composers. The project focuses on promoting collaborative relationships between composers and performers to create new works for guitar, and its inaugural festival in Besançon, France in 2019 has been praised as “extraordinary, in the strict sense of the word,” by La Presse de Gray in France.

Byun’s debut recording in 2020 has been praised by Soundboard Magazine as “a very beautiful disc. From the first notes of the “Gallarda” from Castelnuovo-Tedesco’s Escarraman, we are treated to extraordinary musicianship, technical assurance, and beauty of sound.” American Record Guide says “Byun’s interpretation enlivens them with creative phrasings, articulations, spacing, and dynamics, which take the listener beyond most performances I have heard.”

Born in Seoul, Korea, Byun began playing guitar at the age of six. At eleven, she took the stage for her first solo recital, leading to an early start in her teen years performing numerous concert tours around Korea, to enthusiastic response, including millions of views on YouTube. By her teen years, she had gained national attention for first-prize finishes in three renowned competitions: the Korea Guitar Association, the Music Association of Korea, and the Guitar Foundation of America International Youth Competition.

Byun soon moved to the United States, where she briefly studied in Los Angeles before moving to New York City, where she entered The Juilliard School at the age of sixteen. She holds Bachelor of Music and Master of Music degrees from The Juilliard School and a Doctor of Musical Arts degree from the University of Southern California. She is grateful to the masterful instruction of her pedagogues, who include Scott Tennant, William Kanengiser, Chen Zhi, Tae-soo Kim, and Sharon Isbin.

In 2020, Byun co-founded Guitarlab which has provided an innovative online learning platform offering cutting-edge classes designed for young professionals around the world. Byun is currently on the guitar faculty of California State University Fullerton. She is sponsored by Augustine Strings and plays a guitar by Dieter Mueller (2019). Please visit www.bokyungbyun.com for more information.​